by IPCI Communications Committee | May 11, 2021 | Uncategorized 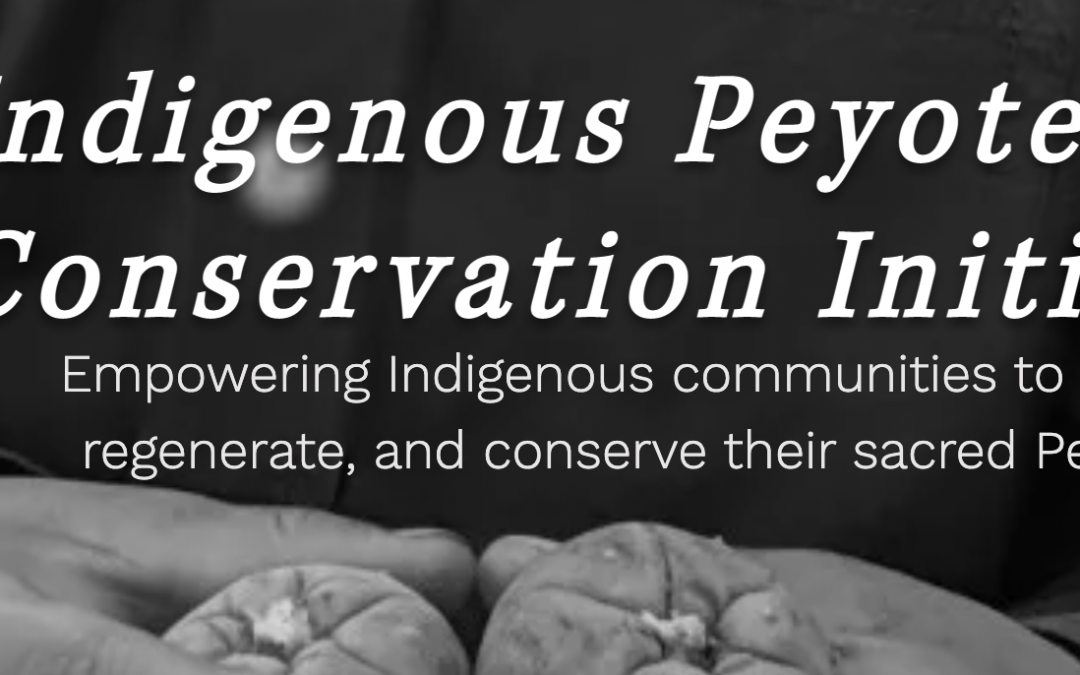 As a Psychedelic movement gains momentum here in the United States a debate has emerged over whether or not to include Peyote in decriminalization measures. It is critical, due to the historical, cultural, legal and spiritual relationship Native Americans have with this sacred plant, its native habitat and its governance, that decision-making regarding Peyote preservation be led by them.

This is a morally and ethically pivotal moment for the psychedelic movement. Can those in the movement choose to operate with respect, listening, offering of support and ultimately getting behind the strategies and plans laid out by Native American people? If so, in 40 years we will look back and know the human community has succeeded. If not, it will be another colonial failure regarding Native Americans.

The National Council of Native American Churches (NCNAC) and the Indigenous Peyote Conservation Initiative (IPCI) ask that Peyote not be decriminalized. This is not due to opposition to decriminalization efforts in general, but because there is an entire conservation strategy already underway. This conservation effort includes regulatory and legal measures designed to ensure biocultural conservation. It is important this effort not be interrupted or diluted. Individual, state, or local decriminalization efforts that include peyote can be disruptive to the nation-wide strategy driven by Native American people to protect, conserve, and ensure the spiritual and ecological sustainability of peyote.

This letter intends to increase understanding of the conservation and legal issues with Peyote in the United States by providing some context, history, and details about Native Americans’ relationship with peyote, indigenous Native American Church (NAC), and NAC’s conservation efforts, as well as suggestions for how the psychedelic and decriminalization movements can move forward in support of Native American communities.

Who are the National Council and IPCI and who do they represent?

IPCI is a conservation organization, formed by the National Council, and its mission includes supporting the long-term conservation interests of all indigenous Peyote peoples and lands of the United States, Canada and Mexico. See https://www.ipci.life for more information.

The National Council and IPCI have made formal requests of the Decriminalization movement and the Psychedelic movements to respect their position and discontinue all efforts to include Peyote. See ”Statement from National Council of Native American Churches and the Indigenous Peyote Conservation Initiative regarding Decriminalization of Sacred Plants Ordinances at the City or other jurisdictional level, as they pertain to Peyote” at https://www.ipci.life/pressreleases

Why is this a delicate biocultural conservation issue?

Peyote’s native habitat is the Tamaulipan Thornscrub/Chihuahan desert from South Texas to San Luis Potosi in Mexico. There is only a small area in S. Texas, all on private land. The cactus needs 5 to 20 years in the ground to mature and be harvestable, even longer to mature to a size that can reliably multiply and regenerate itself when harvested properly. A variety of factors have led to the medicine’s delicate conservation status, including but not limited to: overharvesting or incorrect harvesting by peyoteros (legal distributors or middlemen) and poachers, cattle ranching and tillage, mining, oil and energy production, agriculture and land use, militarized political tension in the borderlands, and most importantly, the historic and systematic removal and disenfranchisement of Indigenous people – the knowledgeable and rightful tenders of the ancient peyote native habitat – from the land. If trends continue, experts say the medicine is in danger of becoming extinct in less than 30 years.

IPCI’s conservation effort addresses modern pressures on the native habitat in south Texas and builds on the foundation of the tribal cultures that partake of Peyote sacramentally in bona fide traditional ceremonial use. This is a wide-spread multi-cultural community engagement, ecological restoration and regulatory conservation effort that requires many complex behavior changes and organizing between leadership, land-owners, families and organizations. As with any conservation effort, it is a process of change. Part of the concern with the decriminalization efforts including Peyote, is that they can disrupt this process in many ways.

Biocultural conservation is different for many different cultures. Over 45 native American tribes, each with their own cultural considerations, rely on Peyote, so conservation will include many different strategies: some chapters will be able to have greenhouses that supply all their community needs; some chapters will conduct pilgrimage to the gardens and engage in ecological and spiritual harvest; some will tend the nurseries in the native habitat that propagate medicines so that two medicines for every one harvested will be replanted; and some chapters are collecting seeds for their own nurseries or for collective nurseries or for return to the native habitat. Some tribes are wanting their own medicine self-sufficiency, others are allied through their organizations. Youth are being trained in the life-cycle and nursery management as well as appropriate songs and prayers and offerings for each cycle. Information is being shared between generations and tribes and technical advisors and land owners.

What’s needed is not an evaluation of this conservation strategy, but support for it as it evolves. What is needed is to support in the ways that are asked for by Indigenous people.
This strategy begins with looking to the American Indian Religious Freedom Act (AIRFA) Amendments and then evaluating adjustments that are needed through a conservation lens. Many conversations are in play at a national agency, legal, spiritual and cultural level about what adjustments are needed for biocultural conservation. Of course, these include massive repopulation efforts in the gardens, land access, propagation in many different ways (greenhouse and otherwise), clearing the way for traditional access methods and new ways for NAC chapters to provide for their medicine needs.

In the early 2000’s NAC members began to notice a decline in the availability of, and size of their Peyote. The Peyotero/distributor system put in place by the State of Texas in the 1970s was removing them from direct contact with the native Peyote habitat and the ability to monitor and tend to the health of their medicine. Internal research efforts between 2013 and 2017 confirmed that the medicine was in trouble.

In 2017, the National Council of Native American Churches convened with several allies; the Native American Rights Fund, Dr. Martin Terry, founder of the Cactus Conservation Institute and the Riverstyx Foundation. Over many months the group agreed that a new organization should be formed, the purpose of which is to support the biocultural conservation of Peyote for generations to come for all indigenous Peyote peoples. That organization is IPCI. A spiritual homesite was purchased in the native Peyote habitat of south Texas to serve as a hub for cultural activities, conservation activities and education, nurseries for replanting in the native habitat, relationships with ranchers (all Peyote in Texas is found on private land) and a base for a culturally appropriate access and distribution system of ecologically and spiritually harvested medicine. This is just one part of a deep, complex healing conservation movement in Indian Country.

The National Council of Native American Churches (NCNAC) is working to assess what is the best way forward for Legal and Regulatory pathways to protect and conserve peyote. They are seeking to understand the next steps to spiritually, ecologically and legally maintain the sacredness of this medicine of this continent, into the future. This is their core responsibility and mission.

Community engagement in Indian Country around the conservation issue is a delicate and new movement, built on generational prayers of many grandparents. They respectfully request that their authority and soveirenity in this matter be honored by all citizens.

There is no reason to include or lump peyote regulation in efforts related to other entheogenic plants and fungi. Peyote is a special organism on this continent, the same way Salmon or Orca are, and can have its own regulatory pathway.

It is extremely important to NAC people that the AIRFA and Amendments not be disrupted in any way. These were very hard won. To undermine AIRFA without a thorough analysis and consultation is very disrespectful and can have a negative impact on the communities who rely on this medicine for their way of life. A lot of work and community engagement has been done in the last 5 years and a lot more is needed. Legal and regulatory matters are just one part of a conservation strategy. Decriminalization getting ahead of these delicate conservation efforts is very disruptive to them taking root and being driven by practitioners in the communities themselves.

Many questions are raised by decriminalization. NAC members may not have weighed in on all these issues, but to push this forward without regard and patience for voices and thoughts from indigenous people will not lead to any kind of agreement or unity in the future. Please be patient and know that issues of personal use, how to regulate, how to conserve, how to honor the medicine are being deeply considered.

Again, the request is that any regulatory changes needed be done very carefully and with Native Americans driving what is needed. Individual, state or local decriminalization efforts that include peyote can be disruptive to the nation-wide strategy and analysis that native American people are already taking care of.

It is appropriate that the Native American Church and the indigenous people who have historical and cultural ties to this medicine be responsible for charting the legal pathways by which this future and sustainability are assured. The healing path forward is for those in the broader movement to ally with them and support the path charted by NCNAC, the Indigenous Peyote Conservation Initiative (IPCI) and indigenous peyote people to be successful.

Suggestions for folks committed to Decriminalization of Psychedelics and Entheogens:

It is wonderful that many more people are caring about the future and sustainability of peyote.

When it comes to this holy sacrament of Peyote, please remember that Peyote is both central to the spiritual life of one of the oldest indigenous religions in this country and is also in dangerously short supply. Out of respect for these realities, please take a step back and be determined to support rather than inadvertently undermine this religion.

If there is already an Indigenous led movement underway, there is no need to do anything but get behind it. As with Standing Rock, we see how unifying this can be. We all strive for equality and respect across our society. Part of our challenge is navigating the complexity of what that means in practice given our unique roles and histories in that society.

As you consider your actions, keep in mind that the United States has a long and sordid history of being bullish and patronizing toward Native people by passing laws that damage them. Be careful that your views are not a way of justifying the selfish individualism so common to settler/colonialist societies.

“The white man has taken from us so much of what we had, our land, our language, even our children. This Peyote is one of the few most important things we have left. We cannot let him take our holy sacrament from us.”

-at Winnebago Tribal Council by an elder from Prairie Band Potawatomi late in the evening on the night of the Supreme Court decision in the Smith case.

IPCI will answer questions about the delicate ecological status of Peyote and how Indigenous Peyote peoples are conducting biocultural conservation of this sacred plant. We hope to discuss questions and concerns relating to how this effort intersects with the psychedelic movement, particularly decriminalization efforts in the U.S.

It’s free!  To register, RSVP here. Registrations close at noon PST on May 25th, at which time we will send attendees the zoom link.  To learn more about IPCI, visit IPCI.life.

These are some of the more common questions we hear at the Plant Medicine Healing Alliance followed by our answers.